Matsya Matsya meaning fish was the first Avatar of Vishnu. According to the Matsya Purana, its legend goes like this. In the beginning of Satya Yuga, the world was destined to be ruined by massive floods.

So far, Lord Vishnu has appeared nine times on Earth and the tenth, kalki, is expected. The sequence of appearance of Lord Vishnu on Earth is in tune with the evolutionary theory. In fact, the ten incarnations of Lord Vishnu is an amazing recording of the advancement of human civilization.

All this was recorded by Hindu sages thousands of years before Christ.

Boar is a complete land animal and in this incarnation, life form has moved out of water and has adapted to land. Any sharp stone can be transformed into an axe and it also indicates the first settlement of humans in forests. The seventh incarnation of Lord Vishnu is Lord Ram. He civilized and has developed more superior weapons like the bow and arrows.

He has cleared the forests and developed small communities or villages. He is very vigilant and protects his villages and people.

The eight incarnation of Lord Vishnu is Lord Balarama.

He is associated with cows, the beginning of domestication of animals and development of economy, which continues to the present day.

The tenth incarnation of Lord Vishnu is Kalki and is yet to arrive. He is believed to ride on a swift horse Devadatha and destroy the world. A clear indication that human beings will bring an end to life on earth. The numerous natural calamities created by human beings and the numerous nuclear weapons stored illustrates this.

Dashavatar – The Ten Incarnations of Vishnu-All ten Avatar of Shree Vishnu Lord Vishnu is said to have manifested himself in various incarnations, called Avatars, for the destruction of evil or restoration of faith and justice in the world. 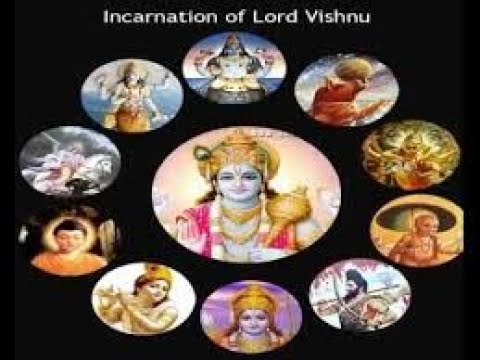 The ten avatars of Vishnu, (Clockwise, from top left) Matsya, Kurma, Varaha, Vamana, Krishna, Kalki, Buddha, Parshurama, Rama and Narasimha. A second image of Krishna in center with his consorts representing Vishnu and Lakshmi. In Indian mythology the ten incarnations of Vishnu are highly spoken of as a theological concept in Vedic history.

In every age Lord Vishnu descended on earth, in either animal or human form to preserve the world and mankind from increasing evil. The first three avatars (Matsya. 10) PRITHU AVATAR (Incarnation as Prithu): Lord Vishnu in his tenth incarnation as 'Prithu' came into existence after the body of King 'Vena'.

Lord Vishnu took this incarnation as .